Luciana received the 2011 Canada Games Young Artist of Excellence Award in 2016. She completed her undergrad at Dalhousie University, then relocated to British Columbia to pursue her MFA in directing at UBC.

Luciana returned to Halifax in 2018 to participate in Neptune Theatre’s Chrysalis Project, which provides practical experience and mentorship to emerging theatre artists.

Devin began playing piano in 2013 at the age of seven, and has won both awards and competitions since then.

He was the 2017 recipient of the first ever Gordon Murray rising Star Award, and one of the winners of the 2017/18 Chebucto Symphony Orchestra Concerto Competition, an honour which gave him the opportunity to perform with the Orchestra in the spring of 2018.

Ian began teaching ballet after touring with CATS in 2013, and relocated from London, UK back to Canada three years later.

Born in Alberta, Charley moved to Nova Scotia to pursue her BFA at NSCAD University. She received the Charlotte Wilson-Hammond/Visual Arts Nova Scotia Award and the Lieutenant Governor Award.

Charley is a practing artist who teaches drawing and printmaking at NSCAD University and Mount Allison University in New Brunswick.

Lee received the Talent Trust 2011 Canada Games Award in 2017, the year he began the MA Typeface Design program at the University of Reading in the UK, which is considered by many in the design industry as the best in the world.

He completed his Bachelor of Interdisciplinary Design at NSCAD University, where he taught as a guest lecturer for two years prior to beginning his MA.

Shanice, a soprano born in New Glasgow, Nova Scotia, graduated from Wilfrid Laurier University with an Honours Bachelor of Music in Vocal Performance in 2017.

Internationally recognized in her day and now revered as part of Canadian heritage, Portia White’s legacy is infused with many meanings. For the Nova Scotia Talent Trust, which celebrates 77 years of supporting aspiring artists of all disciplines on May 2, 2021, Portia White represents its catalyst.

In 1944, members of the Halifax Ladies Club, along with voice teacher Dr. Ernesto Vinci, successfully advocated the city of Halifax and the province of Nova Scotia for unparalleled financial support towards her studies in New York. Portia White ascended to become one of the best singers of the 20th century. The Talent Trust, with the help of the Dalhousie Music in Medicine HEALS Program, supports her legacy through the Portia White Award for a Nova Scotia voice student.

The province recognized the difference their support made in Portia White’s career and founded the Nova Scotia Talent Trust on May 2, 1944, to help other deserving and talented Nova Scotians succeed.

In 1949, we turned our attention to other gifted Nova Scotians. Since that time we've assisted the professional development of over 1,000 Nova Scotians and have awarded scholarships and special awards totaling over 2.5 million dollars.

The Talent Trust and the Province of Nova Scotia

The Nova Scotia Talent Trust was established through incorporation under the province's Companies Act (in the absence of a Societies Act in 1944). Although created as an autonomous organization, the NSTT's first directors included provincial and municipal government representatives and its initial source of funds was a grant from the Province of Nova Scotia.

Since our incorporation the Province has played a vital role in the funding and the administration of the Talent Trust's activities. For many years the secretariat function was fulfilled by the Department of Education.

Beginning in 1983, the Talent Trust board was chaired by the Deputy Minister (or their designate) for the Department responsible for Culture and its directors came from Nova Scotia's arts community. The board not only governed the NSTT's operations, but also reviewed applications to select scholarship recipients.

In 1994, the Talent Trust was restructured to include the Board of Directors and a Scholarship Selection Committee. Since that time the arm's length Scholarship Selection Committee, which is comprised of professional Nova Scotian artists and arts educators, has reviewed applications and selected scholarship and special award recipients. Since 2015, the Talent Trust has an online application form which made the applicants more accessible for all Nova Scotians.

The partnership between government and community allows the NSTT to direct nearly all of the financial resources to scholarships. Individual donations are 100% used to support the scholarships. 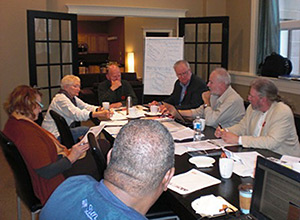 In 2002, we named our first board chair from the community. Mr. Timothy Matthews was elected chair of the Board by the members at the Annual General Meeting in December.

The decision had been made earlier in the year to discontinue the practice of having a government representative serve as chair. We wanted to strengthen the support we received from the community and having an individual from the community as chair better achieved this goal.

The Talent Trust became fully independent in 2010 when we moved into a new office space in the Maritime Centre and in 2017 to our present location at 2307 Clifton Street in Halifax.

Over the last twenty years the Talent Trust has been taking steps to increase our profile in the community. For example, we organized performances by young music scholarship recipients at Government House, and in 2003 produced a festival of artists, called "Tomorrow Today".

In 2019, we celebrated our 75th Anniversary by highlighting former and present scholarship recipients with a traveling arts exhibition called FIRST YOU DREAM, pop-up events in music, theatre, and dance, film screenings and an enhanced special awards ceremony. A campaign is under way to double our annual scholarship amount from $75,000 to $150,000. Have a look at our Art of The Possible Campaign.

Since 1944, the Talent Trust's scholarship recipients have come from a wide range of media within the disciplines of dance, music, circus arts, theatre, visual arts, literary arts, and media arts. Recipients have studied in a variety of settings including summer festivals and instructional programs, professional arts training institutions, university training programs, and private instruction.

These programs take place in Canada, the United States, and Europe, in settings such as the National Ballet School of Canada, the National Theatre School of Canada, the Art Institute of Chicago, NSCAD Universite, the Royal Academy of Dramatic Arts, the New England Conservatory of Music, the McGill University Conservatory, and more. During the pandemic, the scholarship recipients have shown us how dedicated they are to their career and have created various programs online and locally to continue their passion and training.

Many of the recipients have gone on to successful careers in the arts at home and abroad. From the Talent Trust's first 40 years come names like: